The cultural group known as “Gypsy”; are the nomads who originally belonged to the North- Western part of India who thousands of years back (some say as far back as the 6th,9th or some say 14th Century) left India and migrated towards the West. For centuries, Gypsies have been famous for their outstanding abilities in the arts, particularly dance and music. Right through their history, the Roma have been comprised of many different groups of people, absorbing outsiders and other cultures while migrating across continents. This has resulted in creating a collage of groups calling themselves Roma, Romani, Romany or Gypsy, each with differing cultures, customs, and languages. 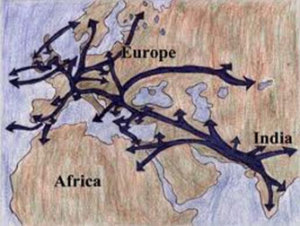 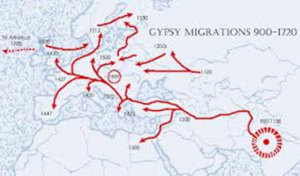 Despite their differences, they do share certain characteristics. Made up of four tribes or nations, they are bound together through Roma blood and through a common root of language that they share. The Roma also hold universal characteristics: they are extremely loyal to family and clan; they share a strong belief in both Del (God) and Beng (the Devil); they believe in pre-destiny; and they have certain standards and norms in codes of conduct (which vary in degree from tribe to tribe). At their core, because of their nomadic history, they are a people who adapt to changing conditions and live their life accordingly.

Thousands of years back, deep in the heart of India, work wasn’t as abundant as it once was in the small villages. This dilemma forced a handful of Indians to become travelling craftsmen, blacksmith and entertainers. They moved along the countryside entertaining villagers at night and using their skills with wood and/or metal during the day. This delicate start to the nomadic life worked well from this point forward. The handful of wandering people grew in numbers as others embraced the nomadic lifestyle, yet they were still able to stay below the Persian radar until 440 to 443. This is when, rumour has it, that the great Persian Shah Bahram Gur persuaded ever so forcefully that the Indian King Shangul should send him 10,000 Luri musicians so that they can run around Persia entertaining the hard-working people. The name Luri is used as opposed to Roma or Gypsy because before the 10th Century, gypsies did not exist by the name of Gypsy or Roma. They were known by various tribal names including Zott, Jat, Luri, Nuri, Dom, Sinti, Domarai and Athengani.

There have been numerous stories associated regarding the migration of the Gypsies. Some say they escaped from India during battles in order to save themselves while others say they were presented as rewards to various rulers as slaves who took them along to different countries. However, the DNA study does show that their origin dates back to thousands of years ago to the North-Western part of India. The great migration was from Europe to the United States during the 19th century and early 20th century. While the origins remain confusing, what one can conclude is that there were great migrations through Roma/Gypsy history that had dispersed them throughout the world.

European scholars studying the Roma/Gypsy have also found that the Romani languages share basic words, including numbers, action, family relationships, etc. with Indian languages such as Guajarati, Punjabi and Rajasthani. The roots appear to be based on Sanskrit, the historical language of the Hindus of India.

Based on language alone the Roma/Gypsy are divided into three sub-groups (Controversial, not many people agree): the Domari of the Middle East and Eastern Europe (the Dom), the Lomarvren of Central Europe (the Lom), and the Romani of Western Europe (the Rom). Among themselves the Roma speak their own language; otherwise they speak the language of the country they currently live in.

Today there are approximately more than twelve million Roma/Gypsies living across the world. They are scattered across Asia, Africa, North and South America and Australia as well.

It’s difficult to put a final count on their numbers, as many Gypsies lie about their heritage due to economic, social and political reasons. Gypsies have faced discrimination and a lot of other problems during their journey but they possess a rich culture and are talented in their art forms which have undoubtedly won hearts of millions of people around world.

This is an ongoing journey of music, lifestyle and tradition which has a common thread of history and culture with Rajasthan, India. The “Jodhpur Flamenco Gypsy Festival” organised by the Mehrangarh Museum Trust, the Spanish Embassy and Cante de las Minas; directed by CRN Productions pays tribute to their struggling journey and celebrates the spirit of their still existing musical heritage which they carry along with themselves.

Ilustration from a book published in 1552 of Gypsies in Switzerland 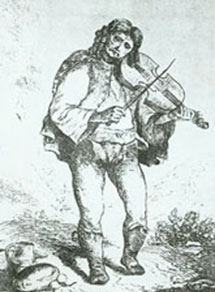 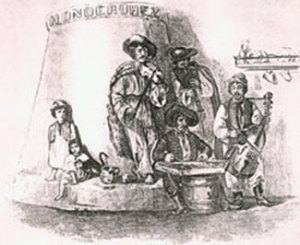 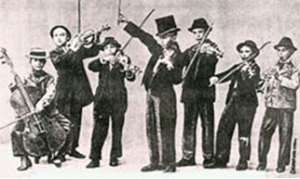 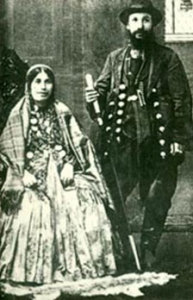 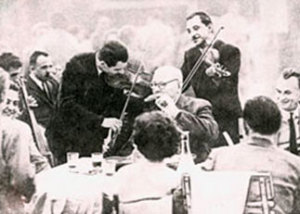 Website Developed by ABCsteps Technologies Pvt Ltd
Back To Top